This simple, delicious gluten free apple pie recipe makes a traditional homemade dessert that tastes just like the ones my mother used to make. The thing that sets this pie apart is the extra-special gluten free pie crust! This crust is flaky, and people don't even know it's gluten free unless you tell them! The filling is loaded with sliced fresh apples and just a little raw sugar.

I often made this pie or Gluten Free Butter Tarts for guests and took them to share at potluck dinners, when we were doing that sort of thing. I serve them to everyone, but make sure that those who need to eat gluten free know they're available. It's makes them very happy!

Peel, core, and slice some apples.

Toss them with sugar, cinnamon, and lemon juice.

Roll out a bottom crust. Place it in a pie plate. Then spread the filling into it.

Roll out a top crust and set it over the filled pie. Trim the edges and crimp them together with the upper edges of the bottom crust to seal them together.

Bake the pie until the crust is golden and the filling is tender.

What is the best apple to make apple pie with?

How long does apple pie keep?

We keep leftover apple pie in the refrigerator for a few days, but there's rarely any left after two or three!

How can I get a flaky gluten free pie crust?

To make this pie gluten free, you’ll need to use Gluten Free Pie Crust. Make sure the oven has fully preheated before you put the pie in. The sudden blast of heat is important to make the little bubbles of fat pop and turn into flakes of crust. If the oven were only warm, the crust would just sort of melt and turn heavy rather than flaky. 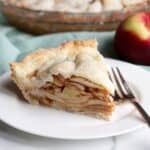 Enjoy this pie made with a simple apple filling and just a little raw sugar. It's all encased in a flaky crust that people don't know is gluten free unless you tell them!
Prep Time 30 minutes
Cook Time 40 minutes
Total Time 1 hour 10 minutes
Servings 6 slices
Calories 325kcal
Author Cathy