Gluten Free Butter Tarts have a tender, flaky golden crust containing delicious sweet maple filling. You can add nuts, raisins, coconut, or leave them plain according to your personal preference. These can also be made dairy free without sacrificing any deliciousness!

Butter tarts are a favourite traditional treat in Canada. They're a little like a small pecan pie with a somewhat runny filling. Canadians are very opinionated about whether they should contain raisins or nuts. Some people prefer the tarts to be runny while others like them to be less messy.

For another great Canadian dessert, try Date Squares with Raisins.

This is the recipe for butter tarts just the way we like them. Since they're made with my Gluten Free Pie Crust that people don't know is gluten free unless I tell them, they are a regular "go-to" whenever I need to bring food to someone's house or we're having company.

I like butter tarts with nuts, and my husband likes them with raisins, so I usually make one half of them with raisins and the other half with pecans. Other add-in options would be currants, coconut, or nothing at all. This recipe is easy to customize because you simply drop the extras into the unbaked tart shells before spooning in the filling.

If you need dairy free butter tarts, simply substitute coconut oil for the butter. In that case, they're not really butter tarts, I suppose, but they're delectable, just the same!

For maximum efficiency, you can prepare the ball of dough for the crust and cook your tart filling the day before baking. Then, while your oven is preheating, roll out and cut your crusts, fit them into muffin tins, and spoon the filling into them.

If you wish, you can make your tart shells and filling the day before you bake them, but store them separately. The shells keep well in the muffin tins, covered in plastic wrap, in the fridge for a day. The filling can be kept in the refrigerator for a few days. You'll just need to stir it before spooning it into the prepared shells.

One advantage to preparing the crusts and filling ahead of time is that you'll be putting chilled filling into cold shells. This results in flakier crusts than you'd get if you used warm filling. Read more about achieving flaky crust in this post about Gluten Free Pie Crust.

The Gluten Free Pie Crust recipe will make much more than you need for these two dozen tarts.  The remainder will keep well for a few days in the refrigerator or a few weeks in the freezer. It's great to be able to pull out later when you'd like to whip up a pie!

After baking your tarts, try to avoid the temptation to take them out of the pans right away. They might fall apart if you try to remove them while they're still warm. If you want to scoop one out with a spoon and eat it, though, I won't judge! The secret to removing your tarts whole without having them falling apart is to let them cool for an hour before you take them out of the pans.

Refrigerate any uneaten butter tarts for a few days. They also freeze well. 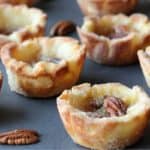