Gluten Free Garlic Bread Sticks are nicely seasoned, crispy little sticks and seriously addictive! I can't stop eating them! When I served them to my family who don't necessarily avoid gluten, they were very well received!

Because our children, who are grown with families of their own, all live far away from us, we don't see them often. Last weekend we rented an Airbnb house in Kansas City, Missouri, so we could be together. Charlie and I drove down from Canada and met up with the others there. I had lots of these Gluten Free Garlic Bread Sticks left over from recipe testing, so I brought some with me.

One evening we made spaghetti, an old family favourite, for dinner. As is my custom, I simply cooked gluten free pasta for everyone. They bought some frozen, sliced garlic bread to toast in the oven. I also heated up a separate baking sheet of these Gluten Free Garlic Bread Sticks and offered them to everyone. People liked them so much that I heated up a second panful!

Egg whites beaten until they are stiff are key to the success of this recipe. They keep the texture light and airy.

How to Beat Egg Whites

You need to separate eggs carefully if you'll be beating the whites stiff. Don't get any yolk mixed in with your whites. Use a bowl that is very clean, especially free of any oils.

Play it safe by first separating each egg one at a time, slipping the white into a small bowl or saucer of its own. Once you're sure the yolk hasn't broken and the white part is successfully clear from any yolk, transfer it to the big mixing bowl with the others.

What if you accidentally get any yolk in with the white?

It's possible to remove a tiny speck of yolk from the white by scooping it out with a piece of shell. However, if you're not absolutely certain that you got it all, it's best to just set that one aside for scrambled eggs or some other purpose and proceed with a fresh egg and clean small bowl or saucer.

Even the tiniest speck of yolk will spoil the whole batch of egg whites from beating properly.

Your egg whites will beat to best volume if they have come to room temperature.

How do I know if egg whites are stiffly beaten?

Egg whites are stiffly beaten when you pull out the beater and it leaves a stiff peak that doesn't fall over. (See picture with instructions below.) This will happen sooner than you think once they turn white. Check early to avoid over beating the egg whites. If the peak droops over, you can easily continue beating just a little more.

When you incorporate the stiffly beaten egg whites into the bread batter, handle it carefully to avoid crushing the tiny air bubbles that have been worked into it. We mix only about ⅓ of the whites into the batter first to lighten it up. That allows the remaining egg whites to then be gently folded in.

Folding is a procedure done by hand. Slowly stir with a large spoon or spatula cutting deeply into the batter from one side of the bowl to the other. Turn the bowl a little and again draw the utensil from top to bottom down one side and directly across the bottom, coming up on the opposite side. Repeat this a few times until the beaten egg whites are somewhat uniformly incorporated, but not completely smooth.

A Note about Mixing Bowls

It's easy to make Gluten Free Garlic Bread Sticks, especially if you have a stand mixer. After years of home baking, I finally got my stand mixer as a perk of the food blog. I'm so glad I did! It would have made many things much easier if I had had it sooner, especially for gluten free baking.

Because I have only one mixing bowl with my stand mixer, I beat the egg whites first while the bowl is still clean. Then I transfer the egg whites to another bowl, so I can beat the remaining ingredients with the machine, too. It's important to work quickly here, so the whites don't deflate and lose their volume.

If you have two mixing bowls with your stand mixer, you can simply use both of them for this recipe and not need to transfer the egg whites to another one.

I find that piping is the best way to form the bread "stick" shape. Piping is a cake-decorating procedure that produces thin lines. These bread sticks are like thick piping. You can use a disposable plastic piping bag if you have one. However, I find that a plastic zip-top bag works as well. It may be even better, because you can seal the top.

The cut across the bottom corner of the bag should be about 1-inch (2.54 cm) long.

In testing this recipe, I tried a variety of baking temperatures and times. Naturally, I like to finish things up as quickly as I can, so I did try to bake them at a higher temperature. I found, though, that if I cooked these above 325 F (163 C), they would collapse in the middle.

Because of the high volume of egg whites in here, we're baking them more like meringues. If you keep the temperature a little on the low side (325 F), they crisp up and keep their shape beautifully. After an hour, feel free to turn up the heat to 350 F to finish browning them.

I sprinkle my Gluten Free Everything Seasoning over these bread sticks. It's a great mixture that I just love on roasted vegetables, avocado toast, and all sorts of things!

After separating the eggs and preheating the oven, whisk the flours, xanthan gum, garlic powder, salt, baking powder, and baking soda together.

In a large, clean bowl beat the egg whites until they stand up in stiff peaks. Set aside.

In a separate bowl, or the same one with the egg whites removed, beat the lard until it's creamy.

Add about ¼ cup of the flour mixture and beat until smooth and creamy. Then add the remaining dry mixture and blend at medium-low speed until combined, stopping to scrape down the sides of the bowl if necessary.

Combine the vinegar and water. Add the mixture to the batter in the mixing bowl and beat until smooth.

Add about ⅓ of the beaten egg whites to the lard-flour mixture and beat at low speed until just blended.

By hand, gently fold in the remaining egg whites.

Cut the corner off a clear plastic zip-top bag. Your cut should be about 1-inch (2.54 cm) across.

Carefully transfer the batter to the bag and squeeze out "sticks" across the width of a prepared pan.

Sprinkle with Gluten Free Everything Seasoning.

Bake in preheated 325 F oven for 1 hour. Then, if necessary, turn up the heat and bake for up to 15 minutes longer until the bread sticks are nicely browned.

How do you eat garlic bread?

If you love this recipe, please give it 5 stars! Thanks so much! 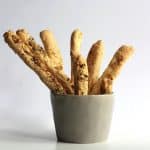 Bread sticks will keep in the refrigerator for several days or in the freezer for a few months. Simply freshen them up by popping them into a 350F oven for 5 to 10 minutes.