A blind pie crust is baked before the pie filling goes in. There's no reason why anyone who has to eat gluten free should be denied amazing lemon meringue pie! I make this blind pie crust with my flakey pie crust pastry that people don't even know is gluten free!

Use this crust whenever you want to make a meringue or cream pie. Any recipe that instructs you to cook the filling separately and pour it into a pre-baked crust is well-suited for a blind-baked crust.

My popular Gluten Free Pie Crust turns out beautifully light and flakey when it's baked with a filling inside. However, it needs to be treated a little differently when it's baked empty, or blind-baked.

For the exact amounts and detailed recipe instructions, scroll down to the end of this post, or click the Jump to Recipe button at the top.

Roll out a ball of pie crust dough with plenty of extra flour. This is about one-fifth of the entire dough recipe. You can freeze the rest for future pies.

Transfer pastry to pie plate and use a table fork to prick the bottom and sides with lots of tiny holes.

Wet and crumple parchment paper and press it into pie crust. Chill it in the refrigerator for a while before baking.

Fill with beans as pie weights and bake for 15 min. Allow to it cool before removing the beans and parchment.

Hint: Keep the beans piled up around the sides, to prevent them from caving in.

How do you blind bake pastry?

My special gluten free pie crust is made with a very moist pastry. Most gluten free doughs need to be moister than the wheat ones we may be accustomed to. This recipe produces a crust that is crisp and flakey rather than dry and crumbly.

How Can You Blind Bake a Pie Crust without Weights?

You can purchase pie weights, little ceramic or metal balls designed especially for the purpose of holding down a pie shell during blind baking. You don't need them, though. In fact, I prefer to use dried beans as pie weights.

With beans, you can use as many as necessary to completely fill up the pie crust. I have found in the past that my purchased pie weights weren't enough to fill up the pie shell as much as I'd like.

What Happens if You Don't Use Pie Weights?

If you don't use pie weights for blind baking, you're likely to have problems with the pie crust puffing up in the centre and caving in around the sides.

Dried beans will work just as well, if not better, than specialized pie weights.

How long do you blind bake a pastry?

Blind bake pastry for 15 minutes. The crust should have been pricked all over with little holes and then filled with weights to keep it from puffing up. If you return the pie shell to the oven for 5 more minutes after removing the weights, you can help to prevent it from becoming soggy.

What temperature do you blind bake pastry at?

For the extra flour used for rolling the dough, you may substitute any of the flours found in the recipe for Cathy's Gluten Free Pie Crust. My preference is to use the white rice flour.

This blind pie crust method works for meringue or cream-filled tarts as well as pies. Try these pretty little tartlets or make regular-sized tart shells and fill them with Lemon Curd.

Keep baked pie in the refrigerator for up to a few days.

You can also blind bake the pie shell ahead of time and store it in the refrigerator. Freshen it up with five minutes in the oven when you're ready to fill and use it.

The crust will also freeze nicely, either before or after baking. Just make sure that it's well wrapped to avoid freezer burn.

I cannot stress enough the importance of using lots of flour for rolling out your pastry for a blind pie crust. 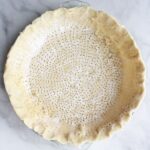 Read the entire blog post for this recipe for important tips and explanations for greater success with your pastry.

Please note that the nutritional information is for the entire single crust. 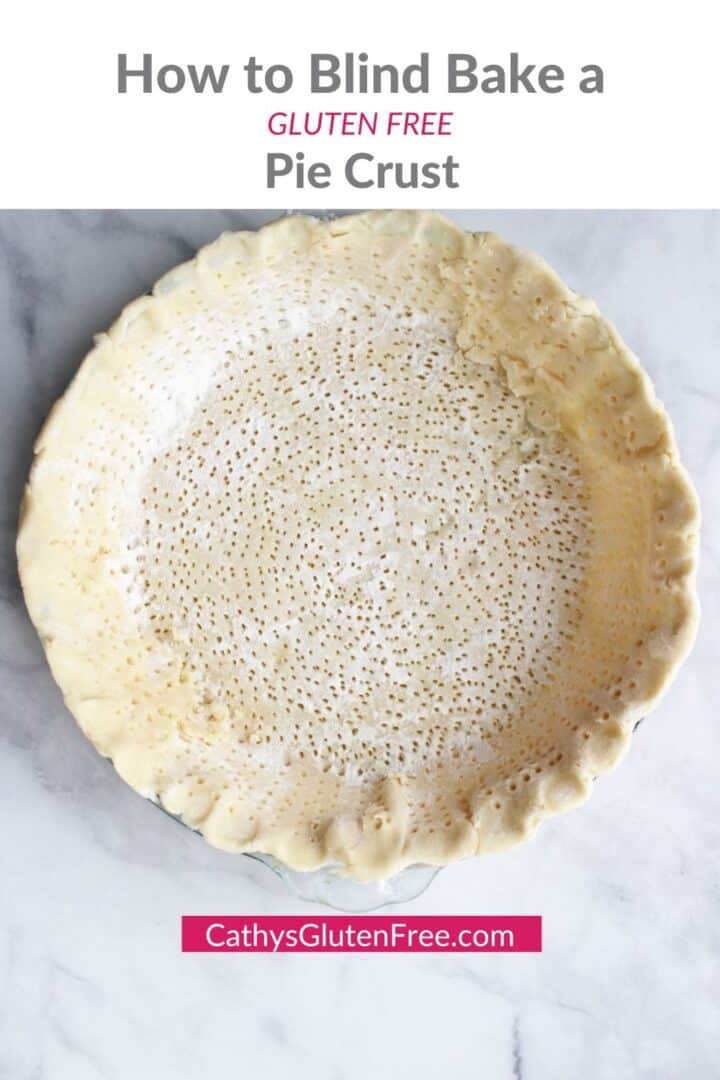