Soft, plump raisin filling glistens between the flakiest of gluten free crusts for a pie that I'm proud to serve to guests - whether they need to eat gluten free or not!

I've made a version of this recipe for years. Now I need to eat gluten free and have developed a great gluten free pie crust. It's not too much of a stretch then to be able to enjoy gluten free raisin pie.

A little research tells me that raisin pie was once known as funeral pie. Because the ingredients were usually already in the pantry, it could be made on short notice. The pie keeps well, so it could be made and perhaps delivered the day before the funeral without requiring refrigeration.

I like raisin pie just fine, and it's one of my husband's favourite kinds. If I ask him what type of pie I should make, he'll probably say raisin. When it's offered in a restaurant, he will often order it.

One time when our server told him that there was one piece of raisin pie left, he spoke for it. However, when she was bringing it to him and about to set it on the table, it somehow dropped off the plate. Well, Charlie caught it in his hands, slapped it back onto the plate, centred it in front of himself, and smiled up at the server as if nothing had happened. She was incredibly grateful for his covering up her fumble, but I think he really just didn't want to lose the last piece of pie!

If you love this recipe, please give it 5 stars! 🙂 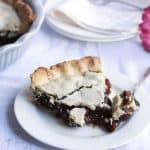 Both the filling and dough for the crust can be made a day ahead and stored in the refrigerator. Refrigerate leftover pie.