Tourtiere is a French-Canadian meat pie traditionally served for special occasions like Christmas. Now, you can enjoy it, too, because this one is free from gluten and nightshades!

While we were visiting our daughter at Christmas time, she served us tourtiere.  She follows a recipe she found on Grow a Good Life, a homesteading blog about the journey to a more self-sufficient life. So that I could eat it too, we were inspired to create a gluten free, nightshade free version.

I'm Canadian and have French roots, but other than a couple of lovely trips through Quebec I've not experienced much French-Canadian culture. I've heard of tourtiere, but my knowledge is limited. Some people call it Quebec pork pie or meat pie. It's a combination of ground meat, onion, herbs, and spices baked in a traditional double pie crust. Depending on the region, there might be wild game or even fish in it.

Denise of UrbnSpice  tells us about her mother's tourtiere with soda crackers in it. Aimee at Simple Bites adds rolled oats to hers. Ricardo's recipe has breadcrumbs in it. The recipe that my daughter uses includes potatoes.

Since I discovered through following the Elimination Diet Meal Plan, that nightshades-particularly potatoes-don't agree with me, I was challenged to make a tourtiere that's both gluten free and nightshade free.

I was challenged to make a tourtiere that's both gluten free and nightshade free.

To make this a gluten free tourtiere, follow this recipe for The Best Gluten Free Pie Crust.  It will make about three double-crust pies, and this is one of the ones I like to make with it.

Watch it all come together in this short video: 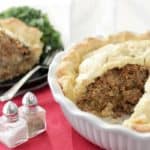