This gluten free bagel recipe yields a lovely, big, soft chewy bagel with a golden brown crust. It contains no dairy, gums, or refined sugar. Yes, you can have warm, fresh bagels!

My inspiration for this recipe was Sue Jennett's gluten free bagel recipe on Sue's Gluten Free Baking @ Home. Sue used to have a gluten free bakery, and she has generously shared her recipes with us on her website. You can hear Sue talk about all things celiac and gluten free on A Canadian Celiac Podcast. Her interviews and discussions are helpful for anyone with gluten free or celiac concerns, not only Canadians.

These gluten free bagels are boiled and baked like other bagels, but instead of a rising period, there's a freezing step. Sue's bagels are terrific, but I made a few changes to suit my own dietary preferences.

Start by putting lard, in chunks, into ½ cup boiling water to melt while you assemble the other things.

Dissolve a teaspoon of raw sugar in warm water (100 degrees F/38 degrees C) in a mixing bowl. Sprinkle the yeast over it and let it sit while you mix the flours.

Combine the flours in another large mixing bowl.

Beat the egg whites into the liquid in the mixing bowl. Then mix in the dry flour mixture and the melted lard blend. Continue stirring it all together until everything is well combined and the dough is coming away from the sides of the bowl.

With wet hands, shape the batter into 8 equal balls. Flatten each a little.

Press your thumbs through the centre, creating a hole.

Alternately turning and squeezing the dough in your wet hands, shape it into the desired bagel shape. Once they're shaped, set them on a baking sheet and freeze them for at least two hours.

Bring a large pot of water to a boil. Add some sugar to it. Add the frozen bagels, two to four at a time, to the boiling water. Add only as many as fit easily and allow the water to maintain a good boil. Poach them until they float to the surface, about a minute or two. You might need to nudge them with your lifter to make sure they aren't stuck to the bottom of the pot. Once the bagels have floated up from the bottom, remove them with a slotted spoon and place them on a parchment-lined baking sheet.

Brush the bagels with an egg wash. Sprinkle seasoning or seeds over the bagels, as desired.

Bake the bagels until they're golden.

What can you do with unused egg yolks?

Use extra egg yolks to make lemon curd or just throw them into some scrambled eggs in the morning.

Once these bagels have cooled completely, you can store them in an airtight container at room temperature for up to three days.

Can I freeze the bagels?

Yes, the bagels will freeze well in an airtight container for a month. I would recommend slicing them before freezing. 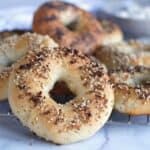