This Gluten Free Sandwich Bread recipe produces a delicious loaf with a soft centre and crispy, golden crust. Free from all grains, dairy, yeast, and nuts, it slices and freezes well.

This particular recipe has evolved slowly over many years. It has its roots in one of the first recipes for bread that I found online and liked soon after going gluten free. That one doesn't even seem to be available online anymore, so I'm glad that I had saved it. It's in a Macgourmet recipe program where I used to copy favourite recipes out and save them on an old laptop. This was in the days before everyone was on Pinterest. Anyway, I was glad to still have the recipe. I often go to that program as a resource to develop new gluten free recipes from old family favourites.

The original recipe involved dissolving three tablespoons of gelatine in water and incorporating that into the egg whites. In the interest of simplification, I discovered that I could achieve excellent results without that step. In fact, the bread is less gooey without it. I also like the nice, golden crunchy crust achieved without the gelatine.

In another attempt to push the boundaries, I attempted leaving out and then drastically reducing the xanthan gum. While I was able to reduce it a little, I found that it was necessary for the bread to rise to its full potential (literally.)

Then I thought, Why couldn't we use some of our egg yolks in the bread? The original recipe didn't, but lots of breads have egg yolks in them. Adding three here worked just fine!

I also tried leaving out the sugar. If you feel strongly about cutting carbs, you could omit it, and the recipe will still work. The organic, raw sugar is just there for flavour. Now I'm all for cutting down our sugar consumption, but I feel that a little sweetener takes this bread from okay to fabulous!

How to Separate Eggs

Separate your eggs carefully. If you get even a speck of egg yolk in with your egg whites, they won't beat up to the fluffy volume required for this recipe.

Separate each egg white into a small dish or cup before adding it to the large bowl where you'll beat them. This way, if you get any yolk mixed in, you won't be wasting a lot of eggs. Just put the messed up one away for another use, and start again with another egg and a clean cup. Crack the side of your egg against a sharpish edge such as the corner of your countertop or sink. I wouldn't recommend using the side of your mixing bowl, in case any bits of shell fall in.

Then, carefully insert your thumbs into the cracked side of the egg. Gently pry it open over your egg white cup. Pass the egg yolk back and forth between the two halves of egg shell allowing the runny "white" part to fall into the container. (It will be more clear than white before it's cooked.) You can watch this process at the beginning of the video on Gluten Free Angel Food Cake.

What to Do with Egg Yolks

You'll have six egg yolks leftover after making this recipe. You can use three of them to make Hollandaise Sauce. You can replace one egg with two yolks in a Sweet Potato Frittata. Or, just add them, for that matter! You'd don't have to be extremely precise with frittata or scrambled eggs.

Not sure whether you need to eat gluten free or not? Or do you really need to avoid all grains, dairy, or even nuts? This is a good elimination diet (*affiliate link) developed by a doctor to help you sort it all out. You might also find my story helpful.

If you love this recipe, please give it 5 stars! 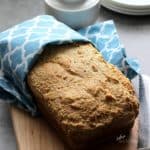