This rustic apple galette combines delicious, apple pie filling with the pie crust that people don't know is gluten free until you tell them, and it's easier to make than apple pie!

For anyone who is intimidated by making pie with a traditional rolled crust, a galette is a great place to start! This easy apple galette is made with pie crust, so you have the wonderful, homemade flavour of apple pie without any of the challenges of transferring pie crust into a pie plate. Just leave it on the parchment where you rolled it. As for folding in the sides, it's supposed to look rustic. You really can't get this wrong!

How Do You Make an Apple Galette from Scratch?

Toss the apple slices with lemon juice, sugar, and cinnamon. Let that mixture sit while you roll out the crust.

Dust parchment paper and rolling pin with a little gluten free flour. Roll out the pie crust until it's about 13 inches (33 cm) in diameter.

Arrange the apple slices in the centre of the crust, leaving space around them for folding in.

Fold the edges in over the filling in the centre, leaving some filling exposed.

Brush some egg over the top. Sprinkle it with a little extra sugar.

Bake the galette until the crust is golden and the apples in the centre are soft.

What is the difference between a pie and a galette?

A pie is baked in a pie plate. It has either a bottom crust, a top crust, or both. A galette is baked on a flat sheet with crust from the bottom roughly folded up over part of the filling. Both may have either sweet or savoury filling. A galette is more rustic than a pie.

Can I make apple galette ahead of time?

Apple galette is best on the day it's made, but it can be made a day or two ahead and kept, well-covered, in the refrigerator.

Can you freeze apple galette.

Yes, apple galette will freeze nicely. Just be sure that it has been sealed in a sturdy container or wrapper with most of the air squeezed out. 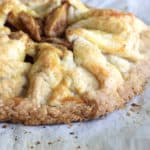