Gluten Free French Toast is an easy special breakfast to make! This recipe has only four basic ingredients, plus butter or oil for frying and whatever you'd like to add on top. You can be digging into this in less than half an hour!

I intentionally keep the ingredients simple, because I like to make French toast when we're in our motorhome. With limited storage space, it's not convenient to be digging out lots of things before making breakfast. I figure that whatever is simple enough for me to make in an RV, is easy for you to make at home, too!

Whisk egg, milk, and cinnamon together.

Soak sliced bread in the egg solution for up to half an hour. If you only have time for a quick dip, that's fine, too.

Fry the saturated slices of bread in butter or oil in a pan over medium-low heat until they are a little puffy and golden on each side.

Just a little research reveals that French toast isn't actually French! Similar recipes have been found dating back to the Roman Empire. An American chef, Joseph French, has been credited with giving the breakfast dish the French name in 1724. However, the name French toast had already appeared in England in 1660. Apparently, French toast was then brought to America with the early settlers. A similar dish is called pain perdu in France.

Can I make French toast for a crowd?

Yes, you can adjust my recipes for any number of servings by clicking on the number of servings in the recipe and moving the slider. A griddle is great for cooking lots of breakfast food at once. I've also used two large cast iron skillets on my stovetop at the same time. Keep cooked French toast warm, set in a single layer on a baking sheet, in a 275° F (135° C) oven for up to half an hour. 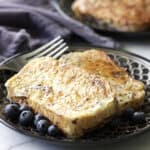 If you're looking for an easy special breakfast to make, this is it! This recipe has only four basic ingredients, plus butter or oil (for a dairy free version) for frying and whatever you'd like to add on top.
Prep Time 10 minutes
Cook Time 10 minutes
Total Time 20 minutes
Servings 2 people
Calories 424kcal
Author Cathy