Home » Recipes by Course » Side Dishes

Borscht is a warm, comforting bowl of goodness to enjoy on a cool, winter day. This is the recipe I've been making for my family for years.

One of my major assignments when I was in high school home economics class was to plan, prepare, and serve a complete meal from a foreign country to my entire class! Each student had to choose a different country. As you can imagine, the easiest countries were snapped up quickly! This was back in the days of the Soviet Union, and I remember my teacher expressing her sympathies that I got suck with Russia.

What she didn't know at first was that I had a little advantage. A friend, and wife of my father's cousin, had immigrated from Russia. She told me verbally how to make her borscht recipe. This must have been my first introduction to bay leaves. I distinctly remember asking her to repeat bay leaf a couple of times. I had probably never heard of it before, and with her accent I had no idea what she was saying. Awkward. So now, whenever I reach for a bay leaf, I think of our dear friend.

As is often the case with favourite recipes, this one has evolved over the years I've been making it. I hope you'll appreciate my current delicious, simplified vegan version!

The other day while I was going through some old recipes, I actually came across my high school notes with my original Borsch recipe. Apparently I also served a sauerkraut dish with bacon and onions, rye bread, and apple torte. Other Russian dishes are beef stroganoff, mushroom gravy, cabbage rolls, and babka, a round loaf of bread.

As with any broth-based soup recipe, using good quality broth or stock is vital. It's not difficult to make your own. You just need to allow some time. I make the easiest stock ever. I simply fill a pot with chicken or beef bones, cover them with water, add a spoonful each of salt and vinegar, bring to a boil, and simmer for several hours. You can do the same thing with an assortment of chopped vegetables to make a vegan broth. In that case, you don't need the vinegar.

Borscht would typically be topped off with a dollop of sour cream. For this dairy free, vegan version, I actually prefer my Cashew Yogurt on it. You'll notice that the nutrition facts for each are listed separately below. 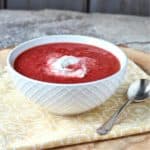 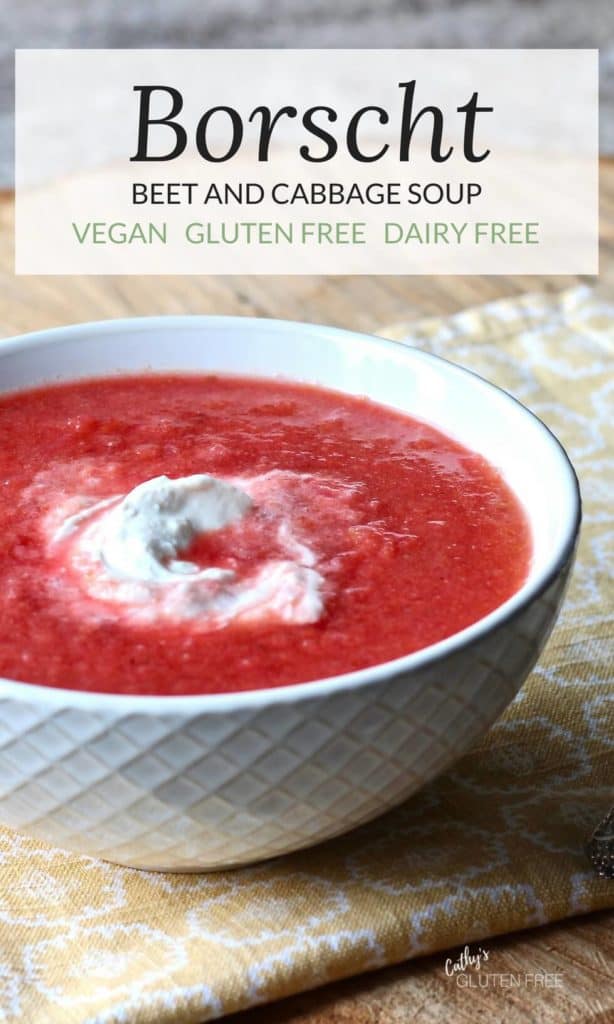